Choose the penetration testing package that best suits your needs

Application Attack Surface penetration testing replicates the attack methods of an opportunistic hacker by confirming and exploiting security weaknesses found during an automated vulnerability assessment. As a time-limited test, it’s a perfect fit for those whose security strategy demands protection against opportunistic attacks.

Get in touch
Application

The Authenticated application penetration testing package simulates a hacker who has phished valid user credentials or infiltrated your perimeter defenses. This longer time-limited test expands on the Attack Surface test and is ideal for organizations who need a detailed test to model an attack by a more determined cyber-criminal.

Designed to simulate the attack patterns of an opportunistic hacker, Attack Surface penetration testing validates and exploits known vulnerabilities that are identified during an automated vulnerability assessment. It’s ideal for organizations wanting a time-limited test, or who want to reduce the likelihood of an opportunistic attacker breaching their defenses.

Authenticated infrastructure penetration testing is a more in-depth test which simulates an attack by a hacker who has breached your perimeter or has phished valid user credentials. Authenticated test packages are typically procured by organizations who want a longer time-limited test in order to simulate a more determined hacker.

Get in touch
Targeted

A complete range of penetration testing customized to your exact requirements. 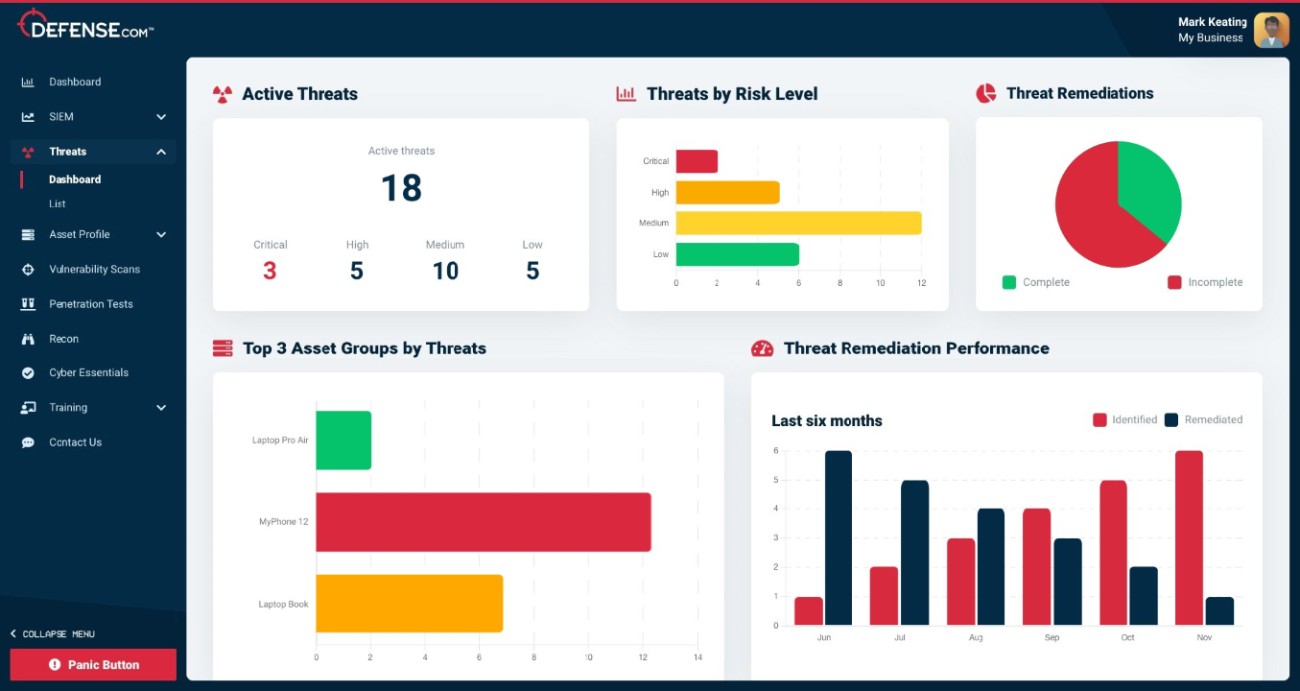 More than a penetration test

After your penetration test, your report will be hosted in our secure Defense.com platform. This will detail each vulnerability found during the test and provide remediation advice.

In addition to your PDF report, you can use Defense.com to quickly identify, prioritize, manage and remediate each threat, saving you time and resources.

Why choose Defense.com™ as your penetration testing partner?

Businesses of all sizes can benefit from a penetration test thanks to our competitive prices.

Our comprehensive reports detail our findings, including remediation advice and guidance.

Our penetration testers are certified by globally recognized bodies such as CREST and OSCP.

Protect your business all year round with 12 months of free vulnerability scans as part of your pen test package.

Penetration testing, also known as pen testing, is a detailed test of your IT infrastructure security performed by specially trained and qualified ethical hackers – called penetration testers. Penetration tests simulate a real–world attack by a skilled hacker by methodically testing your applications and infrastructures for security weaknesses. Unlike a real attack, pen tests are conducted in an authorized, orderly and safe manner.

Penetration tests typically check for misconfigurations, outdated software and logical flaws. Pen testers will also look for ways to escalate privileges if they manage to gain access, making it important that even low-level systems are included in a pen test scope.

Regular penetration testing is a fundamental part of running a modern business. Cyberattacks increase steadily year–on–year across all markets and sectors, making pen testing a core consideration for businesses of all sizes.

In addition to keeping safe from cyber criminals, pen testing can help to increase customer confidence in your services. Regular penetration testing from a reputable provider such as Defense.com™ demonstrates that you take security seriously, which will prove to your existing and prospective customers that you can be trusted with their data.

There are many different types of penetration tests available. The scope of your test will depend on exactly what systems or applications you are looking to check. Here are some common types:

Internal infrastructure or authenticated application tests simulate the damage a malicious attacker could do if they were to breach your network perimeter or phish login credentials for an application. It’s a much more involved test, and also models the impact of a rogue employee or other insider threat.

The detail in pen test reports should include:

It’s a good idea to seek a sample report before engaging a pen test provider – this way you’ll know what you can expect to receive. If a report is full of jargon and difficult to decipher, its use to you is limited. Defense.com™ follows best–practice standards for undertaking a pen test, including OWASP and PTES.

When defining a penetration test, it is important to define how much information is disclosed up–front, also known as the box color:

Yes! At Defense.com™ we have qualified pen testers with a wide range of experience in all kinds of infrastructure, network, application and cloud penetration testing. No matter what your security objective, get in touch with our friendly team for a fast, accurate quote.